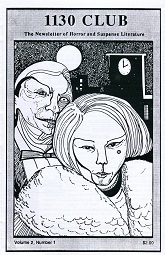 1130 Club was a "newsletter of horror and suspense literature" edited by Clifford V. Brooks and published by 1130 Club Publications of San Jose, CA, U.S.A.

At least five issues were published in the 1980s.

Issue #6 (#2.1) appeared in 1987 and was a book review special issue, with reviews by Brooks, Harold Lee Prosser, Jeff Radt, Octavio Ramos, and Wayne Allen Sallee, plus poetry by Jon Vertho, and nonfiction by Brooks. Cover art was by Marge B. Simon and Jeanette M. Hopper.