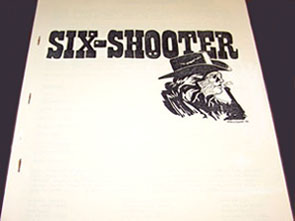 Six Shooter was a UK/USA collaboration, a one shot publication released in August 1987. In issue 6 of her fanzine Whimsey, Jeanne Gomoll writes about Six Shooter; "The three of us all contribute two articles (in two different styles), which makes six articles all together. We call the zine, Six-Shooter, of course."

One of the articles included in the fanzine that received a great deal of attention was "An Open Letter to Joanna Russ", by Jeanne Gomoll. It was later reprinted in Fanthology '87, compiled by Richard Brandt. It has come to be regarded as one of the seminal texts in feminist science fiction writing.

According to Taffiles #2 of 1988, the TransAtlantic Fan Fund (TAFF) Newsletter, "The editors have received so many encouraging letters of comment that they are talking about doing another...a reload, so to speak." Unfortunately, another issue never materialized.

Jeanne Gomoll had previously co-edited Janus with Janice Bogstad in the late 1970s.

Pam Wells also co-edited the fanzine Pulp, with Avedon Carol, Vince Clarke, Rob Hansen, and John Harvey, from 1986 till 1991; and Attitude with Michael Abbott, and John Dallman, from 1994 till 1997.