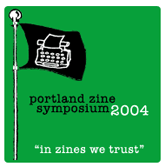 The Portland Zine Symposium is one of the largest annual zine events in the United States. The event, held in Portland, OR, each summer, is free and open to the public and includes workshops on a wide variety of topics relating to zines, independent media and DIY skills. The symposium is organized by Portland State University. It was founded in 2001 by Eleanor Whitney, Joe Biel, and Nicole Georges.