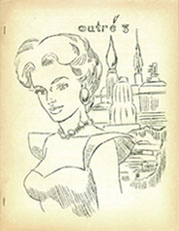 Contributors of writing included John Battle, and Hank Reinhardt, among others.