Difference between revisions of "Habakkuk" 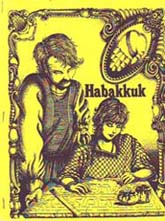 Habakkuk debuted in February 1960. Six issues were released, the last in July 1961, before taking a four year breather. Donaho termed each of these periods "Chapters" and each issue a verse, so that this was Chapter One.

For Chapter Two in its publishing history, Habakkuk was a Fantasy Amateur Press Association publication. Three verses appeared in this Chapter; the first in May 1966, and the last from this period was published in February 1967.

This time 25 years would elapse before a new Chapter arrived. In September 1992 it finally happened. This Chapter saw four verses released, the last in the Fall of 1994.

In each Chapter of its publication history Habakkuk was nominated for a Hugo Award for Best Fanzine.