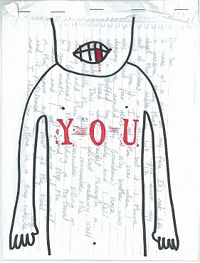 YOU (November 2001-) zine takes the form of a free anonymous letter addressed to you from various writers, usually handwritten, often sealed in a paper bag, published by Luke You. The letter is often signed off 'from Luke' but may also be written by different people. While the significant majority of issues is published in English, a small number of issues have been published in other languages, including German and Arabic.

YOU is published on average in an edition of 200, however ocassional 'zine bagging workshops' have created significantly larger editions. YOU is freely circulated in Australia (Melbourne, Bendigo, Castlemaine, Traralgon, Sydney, Adelaide, Wollongong, and Perth), the U.S.A. (Chicago, San Francisco, Portland, Kansas City) and the U.K. (London and Glasgow). It is also distributed internationally by Sticky Institute and Microcosm Publishing.

An anthology of YOU zine, YOU: some letters from the first five years (2007) published by Breakdown Press, has been released and compiles selections of the first five years of the project. This anthology was launched at the National Young Writers Festival as part of This is Not Art (TINA) festival in September 2007.

YOU is not individually numbered, however during the This is Not Art festival 2007, Newcastle, N.S.W., Luke You published a split zine numbered "#353" with Ianto Ware's Westside Angst #13. 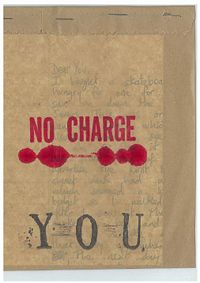 YOU -Dear You, I bought a skateboard...