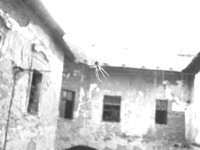 Cover photograph for issue one

Using Space is a zine made collaboratively by Mujinga and other people about squats, social centres and alternative ways of living.

All issues can be downloaded for free via Zinelibrary RiP or Northern Indymedia or squat!net or Cobble Books or mujinga.

Issue one was released in November 2006. It is A5 format, 24 pages with a cover and contains an account of various visited social centres in Europe, with an indepth profile of the Poortgebouw in Rotterdam.

Issue two was produced in June 2007. It focuses on the story of a squatted street in Rotterdam. It has two articles, one in English, one in Dutch.

Issue three featured various short pieces taken from a range of sources. These included: thoughts about the future of squatting; a report on the progress of the now defunct maelstrom centre in Leeds; a personal history of the ELF squat in Amsterdam.

Issue five is a short and incomplete history of squatting in Brighton.