Twilight of the Idols 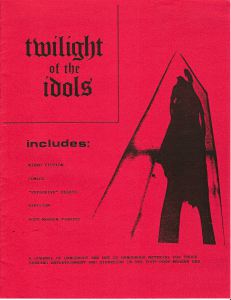 Twilight of the Idols was a punk literary zine published between 1991 and 1993 in San Francisco CA. It was edited by John Marmysz and ran for eight issues. TOTI published fiction, comics, book and music reviews, true-life stories, philosophical essays and poetry; all of which were informed by an attitude of humorous nihilism.

Issue #1: "A journal of dangerous and not so dangerous material for those seeking entertainment and diversion in the post-post modern era."

Issue #2: "The second installment in an on-going saga of yae- and nay-saying, trust and mistrust, light-hearted seriousness and revelations from the Abyss."

Issue #3: "Numero tres in our humble attempt to destroy the concepts of selfhood, ideology, egalitarianism, and whatever."

Issue #4: The fourth step in our quest for a chaos-induced, nitro-injected, pathological philosophy to counter the disfunctional responses of human passion towards post-modern society."

Issue #5: "For the fifth time we heroically venture into that unknown area between word and deed, thought and speech, meaning and nihilism, depth and inanity. Once again we attempt to eff the ineffable."

Issue #6: "Effort #6, in which we sincerely offer redress for all of our sins, offenses, transgressions, misdeeds and peccadillos, past, present and future – then regurgitate all over ourselves."

R. Seth Friedman selected TOTI as the Editors' Choice in issues 47 and 49 of Factsheet Five (1993), writing, "I love the twisted stories of religious blasphemy and recipes for destruction."

Richard Kadrey, in Covert Culture Sourcebook (St. Martins Press, 1993) described TOTI as a zine with "Barely repressed violence and high IQs. For those who prefer their coffee strong and hot, and with a slightly bitter aftertaste."

Maximum Rock and Roll stated that TOTI was "consistently interesting and relentlessly engages in the sort of upbeat nihilism that gives me a smile." (#118, March 1993)