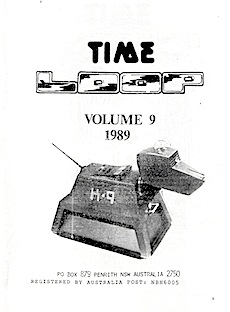 Subtitled "The Doctor Who Information and Newsletter - With A Difference", Time Loop was the newsletter of a Dr. Who fan club, published in Cambridge Park, New South Wales, Australia. It was released from 1981 till 1989. Each of the issues were offset printed, about 10 to 12 pages, and featured updates on current media events. At least 92 issues appeared. One issue was edited by Tim Richards, editor of Mentalis.

Contributors included Tim Cox, and Nikki White (Multiverse), among others.

Time Loop is included in the Susan Smith-Clarke Zine Collection at The National Library in Australia.