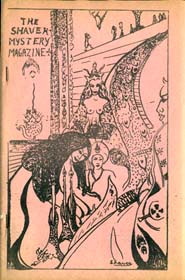 Richard Shaver first came to attention in 1945 in the pages of Amazing Stories, a pulp science fiction magazine edited in the 1940s by Raymond Palmer (The Comet), where Shaver expounded on his theories that beings from another world inhabited underground caverns beneath the surface of our world. The beings, which Shaver called "dero", "de" standing for negative energy, and "ro" meaning slave, as translated from "Mantong", a forgotten language discovered by Shaver, were in contact with extraterrestrials, trading machinery and abductees, and controlling humans by the use of telepathy and secret rays.

"The Shaver Mystery", as Palmer promoted it, dealt also with a variety of other concerns related to the occult, the Forteans, and the Lemurians, and produced the first articles in print devoted to UFOs. Science fiction fans objected to this material, mainly because it was being presented as fact, not fiction, and Shaver began his own publication, The Shaver Mystery Magazine, to cover these topics.

The Shaver Mystery Magazine also included a great deal of Shaver's art work, everything from comic strips to illustrations for his novel, Mandark, in which it is proved that Jesus was controlled by aliens, which was serialized in the magazine.

The Shaver Mystery is now regarded as one of the first conspiracy theories. As well, Shaver has been recognized for his imaginative art work, which is highly regarded by fans of outsider art.