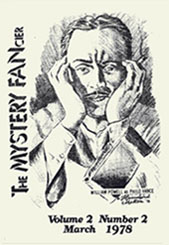 The Mystery Fancier was a fanzine published by Guy M. Townsend.

Originally entitled The Mystery FANcier for the first few volumes, it was published in Memphis, Tennessee, U.S.A. in the 1970s and in Osceola, Arkansas; West Chester, Pennsylvania; and Madison, Indiana in the 1980s, and 1990s. 13 volumes were published, the last issue appearing in Fall 1992. William F. Deeck published an index to The Mystery Fancier in 1993, later reprinted in 2006.