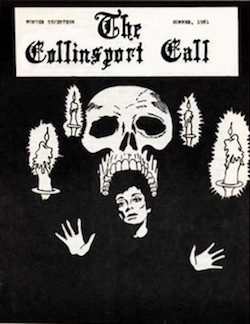 The Collinsport Call was a fanzine devoted to the television series Dark Shadows.

Poetry was by Melody C., and Ann Longmore.

Artwork was contributed by B.A. Dennison, among others.

The Collinsport Call issue 23/34 was published in October 1984/March 1985. For this last issue, Jeffrey Arsenault resumes editorship, and Joseph Collins is listed as editorial assistant.

Jeffrey Arsenault was also one of the organizers of the first East Coast Dark Shadows festivals in Newark, New Jersey, U.S.A. in September/October 1983.