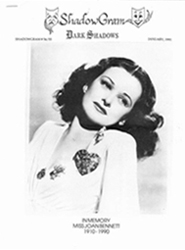 Shadowgram is a fanzine by Marcy Robin devoted to the television series and films, Dark Shadows.

Shadowgram is published in Temple City, California, U.S.A. It was first released in 1979 by Maria Barbosa (who later went on the publish Shadow Star Prints), and was a two page sheet with news of the main actors of the television series. It then became a quarterly. Issue #51 appeared in June 1990, and #55 in January 1993, There have been least 114 issues, although it is now in online form and not known if print copies are still produced.

It is a newszine devoted to current events and news about fan activities, Dark Shadows festival and fan conventions, video and DVD releases, books, collectibles, CD audio dramas from Big Finish productions, the current activities of Dark Shadows personnel, including stage, television, and film appearances, awards, and books, as well as personal details, photographs and messages to the fans.

Also included is the column "Fan News" in which fans keep each other updated on their own work, including zines, travels to conventions, and other accomplishments.

Shadowgram, along with The World of Dark Shadows and Inside The Old House, is one of the foundation fanzines for Dark Shadows fandom.

Marcy Robin collaborated with Kathleen Resch, editor of The World of Dark Shadows, in the book Dark Shadows in the Afternoon, released in 1991.