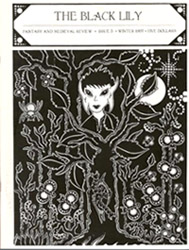 The Black Lily was a literary zine edited by Vincent Kuklewski (d. November 28, 2003) and published by Southern Goblin Productions.

The Black Lily was published in the 1990's in Sarasota, Florida, U.S.A., and later in the 2000s in Hartford, Connecticut. At least 10 issues were released. Issue 10 appeared in Spring, 2002. The focus was on fantasy, historical medieval, gothic/horror, and ghost story themes in fiction and poetry.