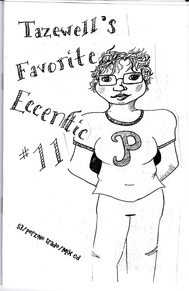 Tazewell's Favorite Eccentric is a perzine written by Sarah Rose.

The title comes from the angst she felt as an out, queer teenager in a small, conservative town in southwestern Virginia. And since she grew up to be a lazy adult, she never really got around to thinking up a new zine name. Since it's second go round, Tazewell's Favorite Eccentric has covered many topics, some of which include childhood sexual abuse, the death, political awareness, and breakups. At least 11 issues have appeared.

From TFE 10 (on the death of a friend): "He had the coolest style and even when we were all busted broke, he looked stunning. He was kind and generous and funny and smart. He had an amazing smile that lit up his face, yours, and whatever room you were standing in. My friend Chuck was a gay man, a good man, and I miss him very much."

From TFE 11: "When you look at me, my heart bursts into song, and your touch paves an intricate map of roads and highways on my skin. You are the girl I have always dreamed of falling in love with, and you both compliment and complete me in ways I didn't know were lacking in my life."