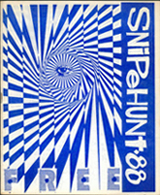 Snipehunt is a zine published in Portland, Oregon, U.S.A. by Mike King.

Snipehunt first appeared in the 1980's, during which time a number of issues were released. This zine focused on the punk, noise, and indie rock scene throughout the world but paid particular attention to the scene developing in the Northwest U.S.A.

Issue 18 of Snipehunt is included in the Sarah and Jen Wolfe Zine Collection at The University of Iowa Libraries.