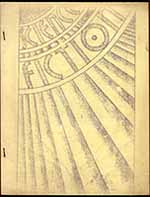 Science Fiction was one of the first generation of science fiction fanzines. It was edited and published by Jerome Siegel (1914-1996) from Cleveland, Ohio, U.S.A.

The first issue was published in October 1932. The fifth and final issue appeared in early 1933.

Seigel went on to partner with Joe Shuster to create one of the best known superheroes, Superman, and issues of Science Fiction ran the first Superman stories and art.