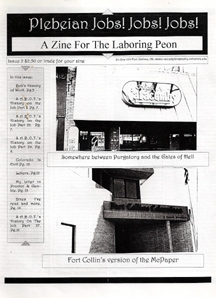 Plebeian Jobs! Jobs! Jobs! - "A Zine For the Laboring Peon" was a zine published by a guy known as S.A.B.O.T. out of Fort Collins, Colorado.

Plebeian Jobs! Jobs! Jobs! focused on work, particularly the working life of the editor. Also inside were letters the editor had written to various companies regarding their products, an interview with Jeff Kelly of Temp Slave!, a feature on Bob Conrad and his work history in Second Guess, zine reviews, and humorous cut and paste ads. Two issues were produced before Plebeian folded.