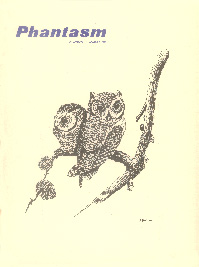 Phantasm was an independent literary journal edited by Larry S. Jackson and published by Heidelberg Graphics.

Phantasm ran from 1976 till 1980, and featured original poetry, fiction, artwork, articles, photos, commentary reviews and interviews. The Features Editor was Mona Ceniceros for issues 5 to 8. The Poetry Editor was Kevin Campbell for issues 9 to 17, and then Phillip Hemenway stepped in from 17 till issue 27, the last issue.