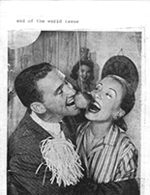 Out, Damn Spot was a perzine with a Riot Grrrl slant done by Penny.

Five issues of the New York based Out, Damn Spot appeared in the 1990's. Editor Penny writes, "I work... to create a balance between colloquial expression and literary expression." In issue five she attempts to do so by the juxtaposition of the lyrics of Human League's "Don't You Want Me?" with her own thoughts, drawings and observations. At the same time, Penny says, "I love being young because I don't have to use big words if I don't want to...", so her zine remains unpretentious and accessible. Also included in various issues; coverage of the Riot Grrrl D.C. Convention; reviews of NYC shows by bands such as Wench, Prunella, Babes In Toyland and Fifth Column; reviews of zines such as Bleed, Chainsaw, Double Bill, Girl Fiend, G-Force, Guerita, Hit It or Quit It, Riot Grrrl DC, Quit Whining, and others, along with a short article about how trading zines has enabled Penny to come into contact with cool girls; an essay on sexuality in the work of artists Michelangelo, Egon Schiele and Robert Mapplethorpe; and much frank discussion about sex.