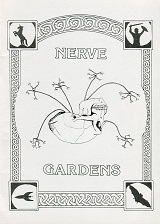 Nerve Gardens was a speculative and fantastic literature zine edited by Keith Jones and Barry Duggan from the United Kingdom.