The Mulberry Digest first appeared as a one-off publication in March 2010, a highly whimsical zine by Su Mwamba exploring the mythology surrounding a world invented to accompany the author's mail art and faux postage. The Mulberry Digest provides an introduction to the lore of Tangledom, dreams, localised mythology, and the TangleFolks' predisposition for reading, writing, arts and crafts. The Dreamtime issue also features 2 cross stitch charts, and a mulberry jam recipe which was reprinted in the November 2010 issue of Craft Leftovers Monthly by Kristin Roach.

4 additional (shorter) issues of the Mulberry Digest were released from 2010-2011 to members of the TangleClub. Each of these later issues featured a single story about or project from life in Tangledom. 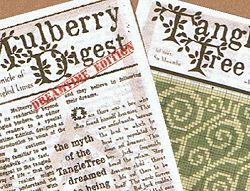 The last issue of Mulberry Digest reprints a feature which previously appeared in A Handmade Life #5 by Robin O. Mayberry (October 2010). Unlike other issues of the Mulberry Digest, this story is written in the first person, and directly explores Su Mwamba's creative processes (in relation to zinemaking). All other Digests are written in the third person and provide a view of life in the fictional realm of Tangledom.

The Realm of Tangledom
now that the Mulberry Digest has ceased publication, most content will be transferred to this site