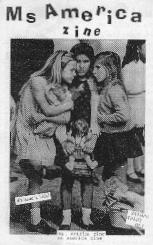 Ms America zine was a Riot Grrrl zine by Sarah and Jen, published in both Normal, Illinois and Chicago Illinois, U.S.A.

Three issue of Ms America zine came out in the 1990's. The zine included short essays.

Issue two featured an interview with Wanda Harper, tattoo artist; going to an auditorium show that included 7 Year Bitch and the reception from male audience members; review of a Tribe 8 show; "Riot Grrrandmas"; and Jen and Sarah's adventures walking around and going to Denny's to try to do their zine.

Issue three included topics such as women's reproductive health and beauty myths, and articles such as "The Urge are a bunch of poo-poo heads they suck!" about the St. Louis band the Urge and their sexist stage show; "Girls Only" about the Girl Convention in Omaha; and "Lois", recounting adventures at a Lois concert.