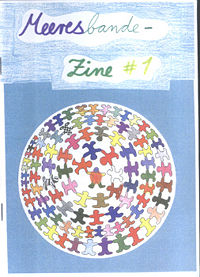 Meeresbande (German for Sea Crew) or Meeresbande-Zine is a perzine from Leona and is about her life with multiple personality disorder.

Some texts are written by Leona and some by her other personalities in German or English language. The first issue was released in April 2009 (in time for the Zinefest Mülheim) and consists of 32 pages. They made a colored cover but the rest is b/w.

Until Oktober 2012, the "collective" released three issues of Meeresbande. All three publications are included in the collection of the St. Patrick's Zine Library.

The zines can be ordered via Lichtstrahlen Oldenburg e.V. [1] – a self-help organization for and by people with multiple personality disorder, based in Oldenburg, Germany.