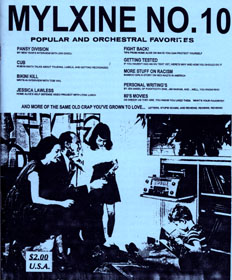 MYLXINE (pronounced Milk-Zine) is a punk zine that was started in September 1995 in Pensacola, Florida by Scott Mylxine. Heavily inspired by the Riot Grrrl movement, this zine was first titled Milk until the author learned of a much larger music zine in the North that went by the same name. Issue #8 was the first with the new name.

The content is a mixture of band interviews (Exene Cervenka, Bikini Kill, Thurston Moore, This Bike is a Pipe Bomb, The Fleshies, Cub, Pansy Division) and activist interviews (Howard Zinn, Jessica Lawless of Home Alive in Seattle and Lauren Anzaldo of the International Solidarity Movement, for example), as well as personal and historical writing, mostly done with an anarchist/anti-war/peace punk political perspective. It also has featured reprints from other zines, including an article by Jen Angel from 10 Things Jesus Wants You To Know and one by Sabrina Margarita Alcantara-Tan from Bamboo Girl.

MYLXINE is featured in Volume Nine of the Zine Yearbook, published in 2007.

Scott Mylxine continues to write and publish MYLXINE; however, since the birth of his daughter in 2005, it will come out with more space between issues.

A zine's website was created by Mike Brody in 2006 to give readers sample writing and for contact information.

The latest issue to be published is #17.