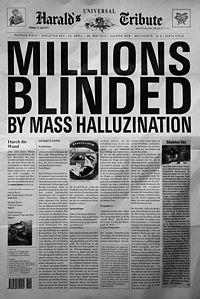 The newsprint publication Harald's Tribute or Harald's Tribute Universal (according to the International Herald Tribune) was produced by M29 | RpB Verlag together with Patrick Rieve on the occasion of the exhibition Skeleton Key. It was published on Wednesday, April 21st 2010.

MILLIONS BLINDED BY MASS HALLUZINATION was the headline of the frontpage. The publication assembles texts by Babette Richter, Daniel Ansoge, Mirjana Beneta, Ante Beneta and Holger Otten as well as artworks by Patrick Rieve including a double page graphic chart as centerfold. All articles are written in German language.

The publication is included in the collection of the St. Patrick's Zine Library.

See also the related article: Adventures into the Unknown