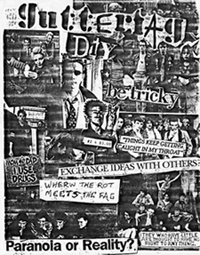 Gutterfag is a one shot zine by Jeff Junker released in the 1990's in New York, U.S.A.

In his introduction to Gutterfag, Jeff defines the title of his zine as an attitude, a personal statement, and a way of life: "Gutterfag (1) one who doesn't know what the fuck people are talking about when they say they just came out of the closet, i don't know about you but i've always been who i am, have you?"

Gutterfag is a cut and paste zine, filled with found photos of punks, from Poly Styrene, John Lydon, Sid Vicious, The Bromley Contingent, Buzzcocks, The Clash, Jordan, The Adverts, The Teen Idles, and Mark E. Smith to anonymous punks on the streets. On top of the photos, Jeff Junker creates his own headlines, ransom-note-style, such as, " i hope my boyfriend gives me his gross disease", and "self-defence: not a sport, a necessity". As well, this zine includes drawings, poetry, stories and advice. He cautions readers not to go to San Francisco, where he lived for two years, because you will no longer find any queer punks there. There is a page devoted to the Queercore band Warpath and the movie The Yo-Yo Gang by G.B. Jones. Contributions include a comic and illustrations by Harlock.

Although this may sound like a standard punk zine, there is a personal aspect included as well. There are three pages of reproduced State-issued documents about Jeff, detailing his disabilities and hospitalization for depression. However, Jeff has collaged statements such as "Whose Game Is It Anyway?", "Go Ahead and Fuck With Us", and "No Way!" all around these pages.