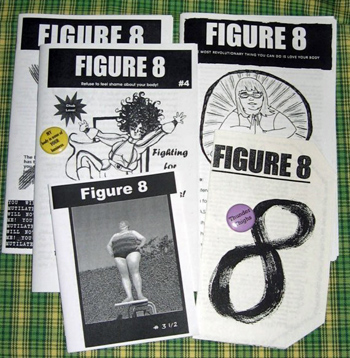 In her zine, Figure 8, Krissy Durden writes about sizism, fat acceptance and The Body Revolution. The zine is based in Portland, Oregon, U.S.A.

Issue 5 of Figure 8 is called a Rainy Day Activity book and is filled with body positive and fat equality games and activities. It was published in 2009.

Figure 8 was featured in volume nine of the Zine Yearbook, released in 2008. It is included in the West Coast Zine Collection at San Diego State University.

Figure 8 was also featured in the a 2009 issue of Signs - a Journal of Women in Culture and Society published by the University of Chicago Press. The essay was written by Jenna Freedman and titled Grrrl Zines in the Library.