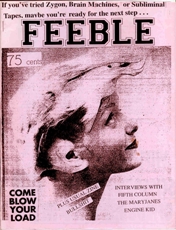 Published in the 1990's, two issues of this photocopied cut and paste zine were released. Issue one features interviews with the bands Fifth Column, The Maryjanes, and Engine Kid, while contributor Princess goes shopping for a bra. In issue two, there are more articles about breasts, as well as bad reputations and crushes, and a critique of the band Strain. Also covered were topics such as representations of women in the media, strip clubs and personal safety. Both issues include record reviews, reviews of films such as Beyond The Valley of the Dolls and Natural Born Killers, reviews of zines such as Cabbage Patch Punkz, Dark Motel, Eschar, Gee-Zuz, Riot Grrrl Victoria, Superior Tenderness and Flavour, as well as lots of opinions.