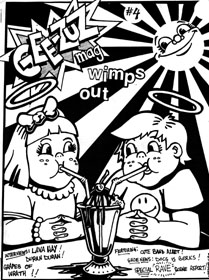 Gee-Zuz zine was published by John Rot'n'Hell out of Vancouver, Canada, during the early and mid-1990's.

Each issue featured punk band interviews, zine and record reviews, and columns and rants. The highlight was the publisher's artwork, which was bold and comic book-like and featured throughout the zine's cut and paste design. The publisher was quite an accomplished artist and painter and usually signed his artwork with the pen name Crazyman.