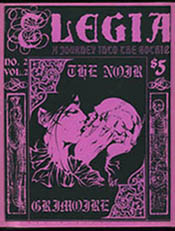 Elegia was a literary fanzine devoted to the Gothic by Marie Buckner.

Subtitled, "A Journey Into The Gothic", seven issues of this small press release appeared in the 1990s, and ending in 1995. The editor stated that the zine was named after the New Order song, Elegia. It was published in Ventura, California. U.S.A., and contained Gothic tales, poetry, essays, art, and articles.

Leon Wild, reviewer for The Ninth Night, said, "This sumptuous magazine is much more than a neo-goth zine. It is a literary milestone for dark aesthetics."