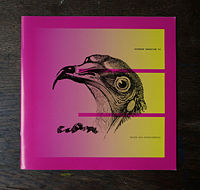 Econore Magazine is a music fanzine (more or less), published by the German record label Econore, based in Mönchengladbach and Berlin. The label is focussing on experimental and all kinds of noise music. Besides releasing music in limited editions (cassettes, cds and vinyl records) they also organise exhibitions and concerts.

Issue #1 of Econore Magazine was released September 2010 presenting art and interviews with musician Carsten Vollmer and The Duke of Zuke. Issue #2 was published Februar 2013 with more pages.

Beside the magazine Econore publishes the Econore Journal. Three issues were released until end of 2013. All issues of Econore Magazine are included in the collection of the St. Patrick's Zine Library.