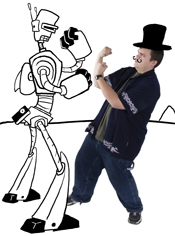 Brett Muller, engaging in a duel of fisticuffs with some sort of robotic roustabout.

Brett's list of minicomics currently include Uneventful Goings-On and The Daily Odessey.