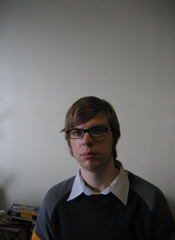 He is the artist of such minicomics as Grunge Lobster and Boxcar Joe. He currently holds a BFA in Sequential Art from the Savannah College of Art and Design with a minor in Contemporary Writing. Pranas is a co-founder and member of the Zine Team, a Savannah-based zine and minicomic collective. He is also a member of Team Zinesou and one of the former leaders of SAIC. His comic strip Rocket Tonic rans weekly in The District, the student run newspaper for the Savannah College of Art and Design, until he graduated in Fall 2008.