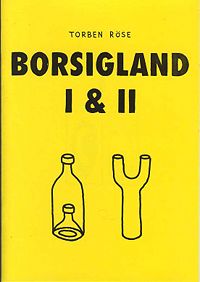 Borsigland I & II was published in Cologne, Germany, by Torben Röse.

As in his previous zine Six Drawings for Victory, this publication is dedicated to material he produced in 1993/94 but set to print in 2013. Especially this work shows the changeover from his cartoon related comics to the abstract series of drawings, moving in the direction of fine arts. This strange minicomic (A5) presents two series of comic panels on 8 pages, introducing comic characters like turtels, raccoons and personified vegetables etc.

The zine is included in the collection of the St. Patrick's Zine Library.

Previously, Torben Röse had published the science fiction fanzine Janx and, with Patrick Rieve, released the zine Ace of Space, which included Rose's drawings. It was released on the occasion of the exhibition with the same title at the BeSt-Kunstraum in Essen, Germany in 2011. His zine Nocturnal Journal was published in 2012.