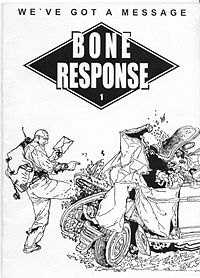 All issues are included in the collection of the St. Patrick's Zine Library.

Bone Response 1 – "We've got a Message" was published in 2001. All authors were labeld with their numbers regarding to the daily radiotraffic while working as bicycle messengers. Contibutions by Alex 23, Dennis 04, Tibor 53, Tom 24, Mark 444 (Mark Wehrmann), Patty 56 (Patrick Rieve) and Malte 89 (Malte Urbschat).

Reviews about bike-messenger related books: The Immortal Class and 25 mio hongkong$: free:lance!. Also in this issue was a poem by Hannes Küpper ("He! He! The Iron Man!") about the Australian cyclist Reggie MacNamara (a roughhouse velodrome rider with a string of dramatic crashes and broken bones (1)).

The layout of Bone Response 3 was done by the Secret Service.