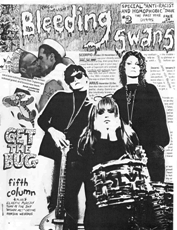 Bleeding Swans is a music zine from Arizona.

Released in the 1990's, Bleeding Swans is a cut and paste publication put together by Jason Colgin, with the help of a number of contributors, who came from different parts of Arizona. Two issues emerged and the focus was on alternative, punk, grunge and garage music.

Issue One featured articles on Nick Cave and the Bad Seeds, Sonic Youth , The Fall and a critical history of the Manson Family.

Issue Two included a feature interview with Fifth Column, who also appeared on the cover, and interviews with Today Is The Day, and Elastic Purejoy, as well as a continuation of the critical history of Manson. Also included is a prank call placed to Jim and Debbie Goad that results in an unusual interview.

Both issues also included many reviews of both live and recorded music and zine reviews, as well as illustrations, poetry, and reworked ads and news items.