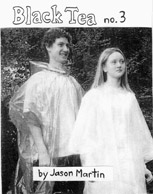 Black Tea is a minicomic by Jason Martin of San Francisco, California, U.S.A.

The first issue of Black Tea was released in summer 2007 with 28 mini-sized pages. Martin originally planned it to be a oneshot zine.

Black Tea 3 is the newest issue, published in April 2010. On 28 mini-sized pages it features 2 long comic pieces, first about Jack Kerouac and the Cassady’s, and second about the authors visit to the Tassajara Zen Center, as well as other short & funny autobiographical comics.