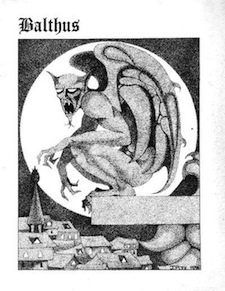 Balthus was a folklore and fantasy zine edited by Jon M. Harvey and published by Spectre Press.

Published in Cardiff, Wales, in the 1970s, four issues of Balthus appeared. The first issue was released March 1971, with issue two following in the same year; the next two issues appeared in 1972.

Issue 1 featured articles on Lin Carter (Spaceteer), and Alan Garner, author of "The Weirdstone of Brisingamen", "The Moon of Gomrath", "Elidor", and "The Owl Service".

Issue 2 featured cover art by Jim Pitts, and illustrations came from David Lloyd, and Rick Scollins. Essays were contributed by Brian J. Frost, writing on A. Merritt; and Jon Harvey, writing on The Wild Hunt. Contributions of fiction included by "Ash Shadow" by Mark Adlard, and "The Smugglers of Penrose" by Sarah L. Eneys.