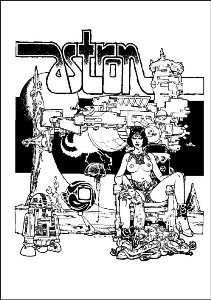 Although the second issue, released in Spring 1978, included Cutts' name in the credits, he had little editorial input and dropped out before the release of the third and final issue in November 1978.

The cover artwork for Astron #1 was commissioned by Green from the noted British magazine and comics artist Brian Lewis. It coincided with Lewis being commissioned to produce a Star Wars-themed cover for the first issue of the news-stand magazine Starburst, hence the inclusion of R2D2 and Princess Leia lookalikes. The movie had its UK premiere in December 1977.