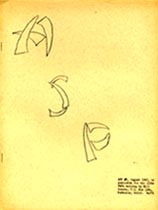 Asp was a science fiction fanzine by Bill Donaho.

Asp was published Berkeley, California, U.S.A. in the 1960s, and distributed by the Fantasy Amateur Press Association. It was a mimeographed publication of around 17 pages. The first issue appeared in March 1963, and nine issues were published, the last in February 1967.

Issue 2 from August 1963 featured the article "Literary Criticism" by Gretchen Schwenn, and Donaho writing about a controversy in FAPA. Issue 6 from August 1965 featured writing by Donaho, Alva Rogers, and Gordon Eklund, Issue 9 featured Alva Rogers writing on the 1966 WorldCon.