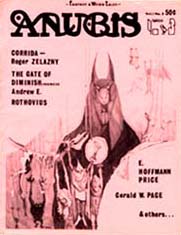 Anubis was a science fiction and horror fanzine edited by Paul J. Willis and published by Ronald J. Willis and Golden Goblin Press.

Also included was a comic strip by Vaughn Bode.

Covers were by D. Bruce Berry, among others.