Difference between revisions of "Telaic Fantasy" 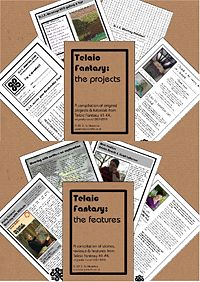 Telaic Fantasy was the very first zine written by Su Mwamba, with issue #1 released in January of 2009.

The title of Telaic Fantasy was borrowed from a piece of music composed by the author's husband, Corey Mwamba (a CD was included with the first copies of issue #1). The word 'telaic' is an archaic term meaning 'weblike' and thus seemed appropriate for a zine about weaving.

The first 3 issues of Telaic Fantasy were released at monthly intervals as part of a package for members of the DIY Weaving Club. After March 2009, the DIY Weaving Club altered format and Telaic Fantasy became an occasional publication rather than a strictly monthly enterprise. The format of the zine underwent various changes over time, and was re-issued in both larger (A5) and smaller (A6) formats, with and without various enclosures/accessories/weaving paraphernalia.

Telaic Fantasy was re-issued as a 2-volume e-zine in January 2012. The new omnibus edition collects the best bits from the original 4 zines, with one volume of Features (reviews, interviews, editorials) and one volume of Projects (DIY weaving club membership, tutorials & related stationery).