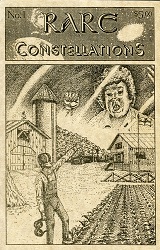 The first issue was dated July 1993, and contained fiction, nonfiction, and poetry.