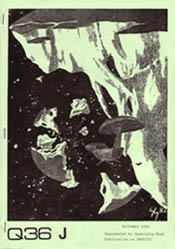 O36 is an Australian genzine published by Marc Ortlieb.

Q36 received the Ditmar Award for Best Fanzine in 1981, 1982 and 1983. It featured exploding planets on the cover as an homage to the Eludium Q36 Explosive Space Modulator, from the Warner Brothers Martian Cartoons, featuring Marvin the Martian.

Some issues have numeric designations and some alphabetical, so issue A was released in September 1979, and ran till Issue K, released in August 1983. Issue 1 was published in February 1982 and ran till issue 5 in November 1983. Q36 was revived for two issues in the 1990s.

Marc Ortlieb had previously published the fanzines Mad Dan's Review. He also published 26 issues of Tigger between 1984 and 1987, and later he did the apazine Stairway to Cleveland, and then The Australian Science Fiction Bullsheet from 1995 to the 2002.