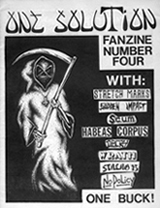 One Solution was a hardcore punk fanzine edited by Morgan Gerard and published in Toronto, Ontario, Canada.

A number of issues of this zine were released in the 1980's covering the hardcore punk scene both locally, in Toronto, and throughout North America. The first three issues were photocopied, but by the fourth issue the zine was printed.