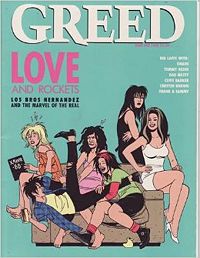 Greed was a zine published out of Washington, DC in the late 1980s. Edited by Kurt Sayenga (who went on to design album artwork for Fugazi, as well as write, direct, and produce documentaries). Its subject matter was diverse; it included arts and music coverage, in-depth articles on a variety of subcultures, social observations, book reviews and more.

Archives that have copies of Greed: