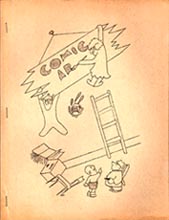 Comic Art is a fanzine by Maggie Thompson and Don Thompson, published by Oblivion Press.

The first issue of Comic Art was released in Cleveland, Ohio, U.S.A. in the Spring of 1961. It was a mimeographed, 14 page fanzine. As described in the editorial "The Word" in issue 1, Comic Art was devoted to all areas of cartooning, including comic strips, books, animation in movies and on television, and political cartooning. It also included the article "Rebirth" by Richard Lupos, editor of Xero, which Don and Maggie both contributed to; illustrations by Paul Curtis and Larry Ivie; an article on the Comics Code by the editors; as well as a reader's poll.

Also included was an interview with Carl Barks by Malcolm Willits, editor of The Comic Collector's News. The interview has originally been done in 1962, but the Disney company had not allowed it to be published until after Walt Disney died, and it finally appeared in Comic Art No. 7, published in 1968.

Comic Art ran from 1961 till 1968, with seven issues published. By the last issue it was a 76 page fanzine that during its run had laid the foundation for comics fandom.