From ZineWiki
Revision as of 06:46, 16 November 2012 by InvisibleFriend (talk | contribs)
(diff) ← Older revision | Latest revision (diff) | Newer revision → (diff)
Jump to navigationJump to search
The printable version is no longer supported and may have rendering errors. Please update your browser bookmarks and please use the default browser print function instead. 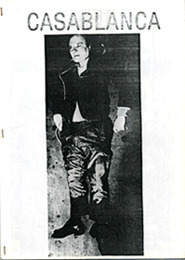 Since publishing his zine, Christophe Bourseiller has written 40 books, such as Generation Chaos, L'extremisme, Mai !981, Les Maoistes, and Lutte Armee. He has appeared as an actor in 25 films, beginning with The War of The Buttons (1962) by Yves Robert, and including such films as A Married Woman (1964), Two or Three Things I Know About Her (1965), both directed by Jean-Luc Godard; Ones and Others (1980) by Claude Lalouch; Three Places for the 26th (1988) by Jacques Demy; and most recently Love Lasts Three Years (2012) by Jean-Paul Bazziconi. He also appears on French television, and has hosted a radio show in France.