A Day In The Air 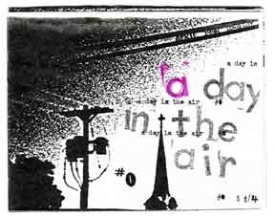 A Day In The Air (also known as adita) is a sporadically published personal zine. The publication was started in April, 1998, in Iowa City, Iowa. It is published in a quarter-sized format. Issues 10, 13, and 15 include a compact disk. The issues are technically numbered with a sequence of zeros (0, 00, 000), however Arabic numbers were later substituted for simplicity. The zero numbering system is reflected on the pages which presented philosophical ramblings about "nothing." Adita #7, "automatic", was named "Zine of the Month" in the February, 2000, issue of Maximum RocknRoll. The first CD compilation was included with issue #10. The most recent issue is "dance, punk." Adita has been collected at numerous zine archives including; Salt Lake City Public Library, Denver Zine Archive, the Chicago Underground Library, and the Special Collections Departments at DePaul University and University of Iowa.

This list is an overlapping of the Issues list only mentioning the specific zines which were accompanied by compact disks. Notable artists include, Jenny Choi, Fifteen, Hewhocorrupts, Modern Life Is War, Ten Grand, and William Elliott Whitmore